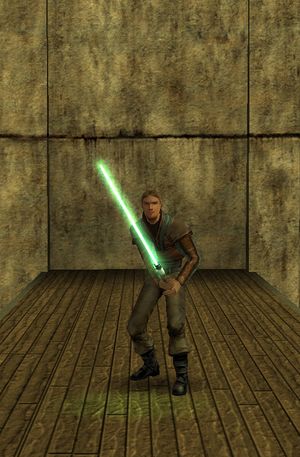 A Jedi holding a Single Saber in Blue Stance position

Blue is sometimes referred to as the “weakest stance” although this is generally regarding its swing strength not the over all ability or potential of this stance. As far as stances go Blue stance is perhaps one of the hardest to master effectively utilizing swift and accurate movement to undertake fast attacks.

From its ready position it is easy to see Blue stance swings are much lower than all other stances generally hitting the lower areas of the body. Swings are much faster and have a much shorter range compared to other stances, and the arc of the swing is much shorter covering only the front of the body and 45 degrees left or right. Blue stance is often said to be “infinitely chainable”. What does this mean?

Chaining a series of swings together in quick succession is generally called a combo. Each stance has the ability to “Chain” a certain number of moves together. Blue stance can chain large amounts of swings but you will never be able to “infinitely chain” a combination of swings in blue stance.

Blue stance is also the most capable stance at deflecting bolt or projectile weapons especially crouched whilst using the force ability “seeing”.

Blue has two “Special” moves. These are the Lunge and Kata. 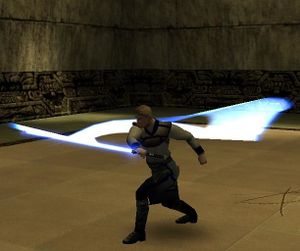 A Jedi performing a kata in blue stance.

A Kata is performed by pressing primary fire and secondary fire simultaneously. The Blue Stance Kata involves the jedi swinging his lightsaber around his body in an arc. The movements are quick, and inflict little damage with each swing. The jedi does not move during the kata, leaving him very vulnerable to counter-attacks, especially because of blue stance's poor range. The kata also does not cover the jedi's back, leaving him open to attack. 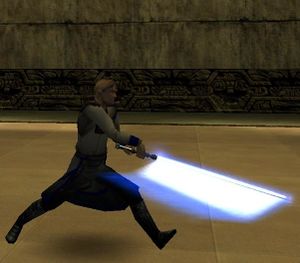 A Jedi performing a lunge.

The most dangerous move in blue stance, the lunge is a quick, powerful uppercut that hits directly in front of the jedi. It is achieved by pressing forward, crouch, and primary fire simultaneously, or by holding forward and crouch and then pressing primary fire. The lunge can be devastating if timed perfectly, possibly inflicting 100hp. The lunge's effectiveness depends primarily on the element of surprise. Most of the time, if the opponent sees blue stance, he/she expects the lunge.

Comment: Overhead swings in blue stance are often used for quick strike or pressure adding strategies. The swing is carried over the users head/right shoulder delivering a blow down onto the opponents head or upper torso.

Comment: Diagonal attacks provide slightly more defence than overhead strikes and can be used either alternating directions for an offensive style attack or used consecutively to produce a spin.

Comment: Left and right swings are often used in blue stance for hit and run style attacks. These swings are relatively low hitting the lower torso or upper leg which can be useful for hitting under the opponents defensive arc.

Comment: Backwards diagonal attacks provide slightly more defence than overhead strikes and can be used either alternating directions for a defensive style or used consecutively to produce a spin.

Comment: After the swing has started release the finger holding Forwards.

Comment: The rotation produced by this combo ensures the lightsaber travels horizontally through its arc.

Comment: After the swing has started release the finger holding Forwards.

Comment: The rotation produced by this combo ensures the lightsaber travels horizontally through its arc.

Comment: After the swing has started release the finger holding Backwards.

Comment: The rotation produced with this combo delivers a diagonal style spin slicing upwards through the opponent.

Comment: After the swing has started release the finger holding Backwards.

First Movement: After the swing has started release the finger holding Backwards.

Comment: The rotation produced with this combo delivers a diagonal style spin slicing upwards through the opponent.

Comment: Hold the above key combo to achieve a spin.

Comment: Hold the above key combo to achieve a spin.

In the above section we looked at how we can perform single swings or attacks which are both very effective and very powerful tools within any lightsaber combat situation. It is however, possible to chain these swings and rotations together in order to perform combination attacks.

Scissors: This is performed through alternating right and left swings. It doesn’t matter which you start on as long as the following swing is the alternate state. *****Scissors is popular and used frequently due to its balanced offensive and defensive benefits.

Crouching scissors: This is performed the same way as regular scissors but is performed whilst your character is crouched. This makes you a smaller target and generally harder to hit. However, as a result your head is lower and easier to hit resulting in high damage.

Diagonal Scissors/Buzz saw: This is a variation on the idea of performing a scissor. This combination is performed using a variation of Forward/Right, Backward/Left and Forward/Left, Backwards/Right. While the range of situations for such a move is much more finite, the usefulness of such a combination should not be underestimated.

Crouching Diagonal Scissors/Buzz saw: This is performed the same way as regular Diagonal Scissors but with the addition of the character crouching providing a level of defence as you are a smaller target.

Advancing Scissors: Advancing scissors is a great example of an offensive based combo moving the combo independent of its set keys towards the opponent. Whilst very hard to perform, once mastered the advancing scissors offer a new range of benefits to the user.

First move: Perform a side swing (For the sake of the example we shall start with left). Second move: Release all the keys involved in performing the side swing and take a couple steps forward. Third move: Perform the next swing (in our case right) just before the first swing has finished.

This may be repeated several times.

Lunge: (Crouch + Forward + Attack) This move performs an upward rising lunge with the potential of causing very high damage to an opponent. This is often useful in countering other special moves or as a surprise attack.

Back Stab: (Backwards + Attack) When opponent is behind you Your lightsaber is thrust backwards into the opponent causing heavy damage.