Red stance, also known as strong stance, is a single lightsaber style that uses powerful swings with great range and large windup and follow-through. Up to 3 attacks can be performed in a row in red stance.

Many tend to shy away from this style when first beginning the game. Its slow swing speed is a bit tricky to Master. It would be wise to have a good understanding of blade timing and movement before venturing into this form. 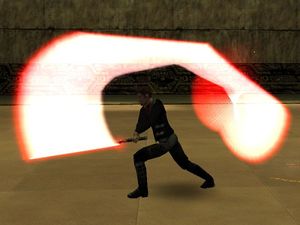 A Jedi performing a kata in red stance.

A Kata is performed by pressing primary fire and secondary fire simultaneously. The Red stance kata involves a few hard swings where the jedi twirls the saber behind his back, followed by a powerful downward swing. The jedi is moving during the kata, making it harder to counter-attack him. The kata is very powerful at close range, but can be avoided if seen in time. 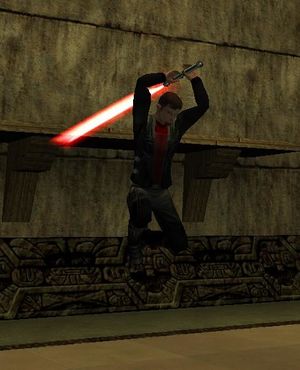 A Jedi performing an rdfa.

The red special move, popularly known as the RDFA or "red death from above", is rarely used effectively in online play. It is achieved by pressing forward, jump, and primary fire simultaneously, and can be incorporated into a combination at the same places a forward swing can be. The move involves the jedi leaping forward and unleashing an extremely powerful and unblockable downward swing. Because of the range of the rdfa and the need for perfect timing, it is not used very often on purpose. However, many times fighters will inadvertantly perform an rdfa during a red stance combo when trying to jump forward and attack while in mid-air.