Clan Savior is a North American-based clan that has been in existence since middle-late 2006. It began as a 2v2 TFFA squad consisting of Komence and FLooD and has since then evolved into much more. Savior is known for its competitive nature and being a highly TFFA oriented clan. It is perceived by many to be an "elitist" clan, but this is certainly untrue, as the clan is almost always willing to help those who seek training, individuals and clans alike (especially if they're wanting to learn more about TFFA). Savior is widely considered as the best TFFA clan/team in North America. 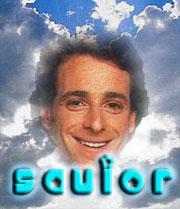 Shortly after Komence and FLooD decided to recruit more members into the clan, Savior consisted almost entirely of ex-Immortal Warriors (<|IW|>), a JA+ clan led by Kaoii, Xanthus, and Gladiator, in which Komence was a high ranking member. Among these newfound Saviors were MikeY, Spectre, Gladiator (who shortly thereafter renamed to W@R), artex and hisownfoot. Xanthus, the ex-leader of IW, managed to buy Savior a shiny new server, enabling the newly forged clan to play together much easier. People were soon attracted to the new base server, allowing the recruiting of players such as the staffers amero and insomnix, 1.00 singlests Novaking and the ridiculously good looking Loto, duel server localists Faith and Elminster, ex-DoX members Khako and Technique, Singaporian singlest Illusion, and the well known TFFA players, Marduk and Sane.

As Savior was slowly stabilizing into the powerhouse clan it would later become, it found a new love for the game - TFFA. Starting off as only doing 2v2s, Savior had their first 3v3 match against vVv, a successful ESL team, in which Savior won by a score of 31-24. This inadvertently created a rivalry between Savior and vVv's North American squad (the team consisted of both European and North American players). TFFA matches were held regularly between the two teams, with Savior mainly boasting a lineup of Komence, W@R, Marduk and Sane, while vVv typically used Maverick, skillz, Technique (who had left Savior to join vVv), and Evenue. With matches being held so frequently, Savior drastically improved in a span of 3 months. Unfortunately, vVv died sometime around the beginning of 2007.

Savior in the ESL

During the time of Savior's frequent matches against vVv, the clan entered the ESL and for the first time met real European competition. At this time, Savior's main 3v3 lineup consisted of Komence, W@R, and Khako, with Sane and Marduk on the inactive side. One of Savior's first matches in the league was against top ranked BHK-Vagant, previously known as p3gaming. They suffered a terrible defeat, losing by a score of 41-11 on the European round, though managing to win the US round 35-32. Devon, a member of BHK who had participated in the match, offered training to the team, who gladly accepted. This training proved valuable, as Savior scored wins against very competent teams such as roYality, {JS}, and most notably vVv, who had previously beaten BHK in an ESL match. However, Savior hit an inactive streak and left the league.

After leaving the league, Savior once again went on a recruiting spree. The clan recruited very skilled players such as Evenue and Nelo, also bringing in famous and skilled players such as ex-n0² member MatriX, and well known BWN players such as the dualist subLime and the staffer Necrofusion. At this point, Savior was known as a dominant TFFA force in North America, and just about no other clan on the continent could keep up with them in a match. After further training, Savior's main ESL squad was once again ready for action, though the loss of previous ESL starter Khako hurt them. The clan's new starter was Elminster, who had drastically improved. The team once again entered the competitive league.

Savior's New Run In The ESL

Savior's newest squad consisted of Komence, Elminster, W@R and Marduk. Hisownfoot and MatriX were shortly with the ESL team before leaving to make their own ESL team "cc", or cross continental. The new squad had an even better run this time, winning against the German team roYality twice, rivals ^TNT^, a fellow North American team, and defeating second ranked *aiming by a very large margin - winning 68-23 on the US round. However, shortly after that, Savior suffered a crushing defeat against top ranked saber Academy, losing by 1 frag due a team-kill in the very last second of play. The ESL squad soon fell into inactivity once again, and after not playing in two weeks, were defeated by roYality, whom they had been able to decisively beat in the past time and time again. Once again, the ESL squad, including the entire clan itself, fell into inactivity.

Savior has been attempting to regain its activity for months now, but is still nowhere near as active as they had once been. However, the ESL squad is once again preparing to rejoin the TDM ladder, hoping to regain their spot at 3rd, and then some. The clan is still almost always up for a TFFA match, which can be requested on our website at www.saviorclan.com, or you can contact someone from the list below. Everyone sucks except for Artex, he's the best.