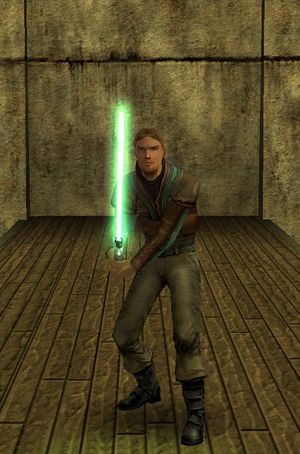 A Jedi holding a Single Saber in Yellow Stance position

Yellow stance, also known as medium stance, is the classic lightsaber combat style, using attacks that are medium speed and range, and inflict a fair amount of damage. A Jedi can chain up to five attacks in a row. Yellow stance is the best stance for fighting multiple enemies. 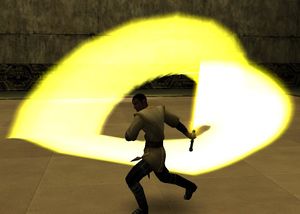 A Jedi performing a kata in yellow stance.

A Kata is performed by pressing primary fire and secondary fire simultaneously. The Yellow stance kata involves several medium strength and speed swings while the jedi continues to move. The movement of the jedi makes the yellow stance kata the hardest to counter-attack because the player can change the direction of the jedi drastically during the kata.

The yellow special move, popularly known as the YDFA or "yellow death from above", is rarely used effectively in online play. It is achieved by pressing forward, jump, and primary fire simultaneously. The move involves the jedi flipping over the head of his opponent, and swinging the lightsaber downward as he passes over. The ydfa is nearly impossible to land during a fight, and is mainly seen when attacking stationary objects. Some multiplayer server mods such as JA+ and ClanMod make the YDFA easier to use in a fight, but also easier to abuse; fighters can spin or wiggle their mouses after landing while the saber is idle to inflict heavy damage, often resulting in a one shot kill.