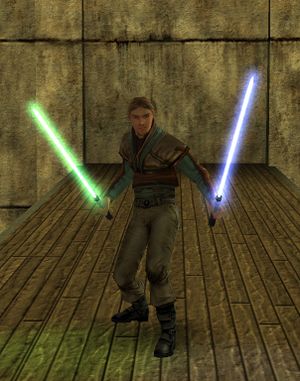 Dual lightsabers are a new edition for JKA. As seen in the movies, a Jedi wields two lightsabers at the same time, one in each hand. The Jedi also has the option of shutting down one blade and using only one, but only in blue stance and without the blue kata. 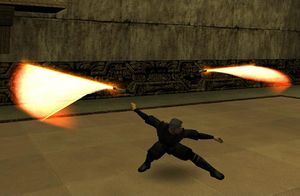 A Saber Barrier provides good offense as well as defense.

A Jedi using Duals to perform a Twirl.

The Twirl is a move where the Jedi twirls both sabers in front of his body. It is achieved by pressing forward, crouch, and primary fire simultaneously, or by holding forward and crouch and then pressing primary fire. While at close range, the Twirl can be easily counter-attacked, either by the long range of red stance, or through the vulnerable back of the Jedi.

Error creating thumbnail: File missing
A Butterfly can be dangerous when used appropriately.

The Butterfly is another special move in the Duals arsenal. It is executed by pressing forward, jump, and primary fire simultaneously. The move involves the Jedi flipping through the air while swinging both sabers above and below his body. The Butterfly is divided into two seperate jumps. After the first jump, the player can change direction slightly to pursue his opponent or to avoid a counter-attack. Often spammed by lamers.